It has been quite some time since I went butterfly shooting so last Saturday I decided to visit a few of my favorite urban parks. It was a bright sunny day and there were lots of butterflies. I managed to photograph a few not so common butterflies which I want to show all of you: 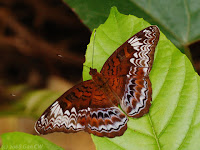 1. The Knight (Lebadea martha parkeri)
This is a female. The male has forewings with white apex. Knight is usually found singly and you are likely to find it at Pulau Ubin, Pasir Ris Park and Telok Blangah Hill Park where its host plant, the broad-leaf Ixora can be found. 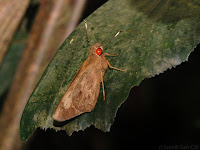 This is a fast flying large skipper with red colour eyes. It is so named because its caterpillar feeds on the banana leaf. When you see rolled leaves on a banana tree, you know the Banana Skipper is somewhere nearby! 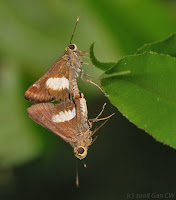 This is a rare skipper, a 3-star ! To the untrained eyes it could easily be mistaken as a Banded Demon skipper. 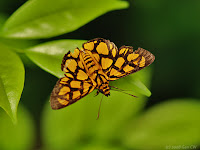 ortina)
This is a 4-star, a very rare skipper! It has very unique patterns on the upperside and cannot be mistaken for any other skippers. It is extremely skittish and will dart off when approached.