The Common Palmfly (Elymnias hypermnestra) is a common butterfly in Singapore. It is so named because it is common; and its caterpillar feeds on many species of Palms. 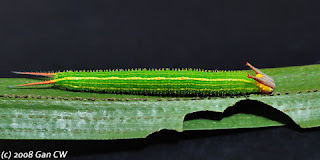 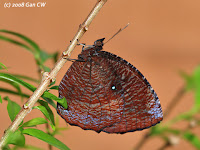 back, reared it and it pupated 6 days later. 7 days later it emerged from the pupa. It rested on my Sui Mui plant for a few hours before it took off.
I have lost count of how many caterpillars I have reared and released over the years. I think the number is anywhere between 50 to 100. One of these days I will flip through my log book and do a count.