Eggs, caterpillars and pupa from our urban park 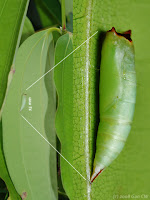 First the pupa. Bionic-eye Simon spotted a pupa on the leaf of a Wild Cinnamon (Cinnamomum iners ) tree. The pupa is only 15mm long and attached to the leaf like a Papilonidae and Pieridae pupa - upright, with the head at the top, anchored at the anal end and supported by a girdle. What could it be ? We have not seen any pupa that looks like this! If it were bigger, there is a possiblity that it is a butterfly pupa. However, since it is only 15mm, my guess is this is a pupa of a moth. The only way to confirm is to observe what comes out of the pupa. We will know the answer in a few days time ;-)

Next about the 2 caterpillars. 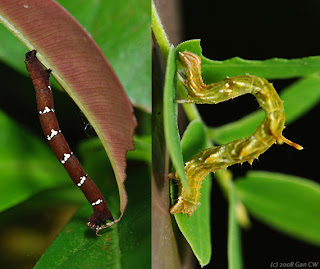 These are commonly known as Inchworm. They are larvae of moths of the family Geometridae. Unlike other caterpillars, they only have two or three pairs of prolegs at the rear end and no prolegs at the middle section of their abdomens. They move by drawing their hind end forward while holding on with the front legs, then advancing their front section while holding on with the prolegs. They are usually between 30~50mm long.

Lastly, about the eggs of the Skipper (Hesperiidae) butterfly

The eggs of the Skipper butterfly are very tiny and the only reason we were able to spot them is because we saw the females ovipositing.
The first egg (#C8, photo above, left) is smooth and milky white in color. Unfortunately I did not manage to photograph the skipper so I will have to rear the caterpillar to find out the id of the skipper.

The other egg (#C9, photo above, right) is unique because it is camouflaged by a bunch of dark colored hairs! Simon saw the skipper curling its abdomen but when we examine the leaf, we could not find any egg. We examined the leaf a few times and still could not find any egg. I decided to take a picture of the leaf and when I examine the leaf in the camera's LCD screen, I saw a white color egg! Amazing, a camouflaged egg!!! This is the first time we have seen a camouflaged egg !

Both eggs should hatch tomorrow or latest by Tuesday. More to come ...
Posted by Green Baron at 10:31 PM