I woke up at 7am and knew immediately that I was too late. I went over to my study room and saw an empty pupa :-( A male Baron was resting on the edge of the breeding box. Its wings had already fully expanded and ready to take off. I quickly grab my camera and took a few shots before it flew towards the window and in the direction of West Coast Park. Adios !! 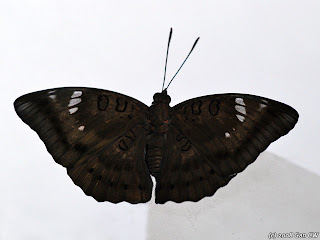 Below are shots of the pupa before and after the butterfly emerged. The one of the left was shot at 11pm last night. Unlike the one shot yesterday evening, the Baron's wings have developed dark coloration and the patterns are no longer visible. 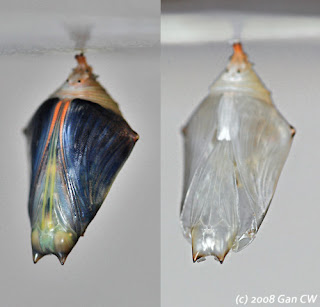 The one on the right is an empty pupa case.
Posted by Green Baron at 8:21 AM