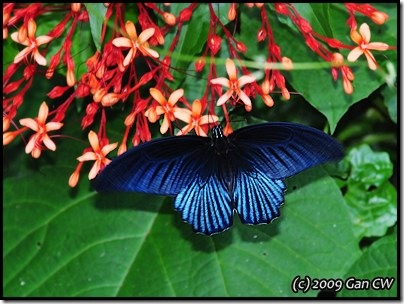 A male Papilio memnon feeding on the nectar of Clerodendrum paniculatum.

This is my BEST ever butterfly trip and a very very tough one to beat. It is not that my previous trips were no good. In fact all of my butterfly trips to Malaysia and in particular Fraser’s Hill have been fantastic, I usually get at least a lifer and see many rare butterflies. In May 2007 I had the Green Dragon Tail, Dec 2007 - the Kepala Puteh, April 2008 – Purple Sapphire and Branded Yamfly, May 2008 – Banded Peacock and The brimstone, Dec 2008 - The Red Caliph, Feb 2009 – The Great Blue Mime, and 4-Bar Swordtail , Mar 2009 – The Black Forrester and Mar 2009 at Gopeng – Rajah Brooke’s Birdwing puddling en masse, Doleschallia bisaltide continentalis and Catapaecilma major.

That is an impressive list but what separates the April 2009 trip from the rest is the number of rare butterflies we saw and photographed. I made a list of what we saw and we had close to 130 species and more than 20 rare butterflies ! I am sure if Simon were there, the list would easily hit 150. 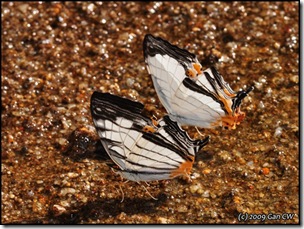 In fact just before the April trip, Simon and I were browsing The Butterflies of Malay Peninsular (BMP) and chatting about what we would like to see in future butterfly trips. I said I would like to see Garphium empedovana, Meandrusa payeni, Symbrenthia hypatia and Ixas sp. These are some of the rarest butterflies in Malaysia and I will be happy if I see just one in a trip. And guess what ? I saw three out of the four in April and just missed Meandrusa payeni by a few hours. 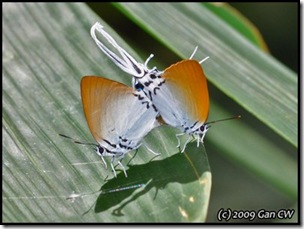 No amount of words or pictures can convey my excitement and joy of seeing these magnificent butterflies in situ but I hope the pictures below will at least excite those who read my blog and show the varieties of butterflies that Fraser’s Hill and the surrounding areas have to offer.

So here it goes … 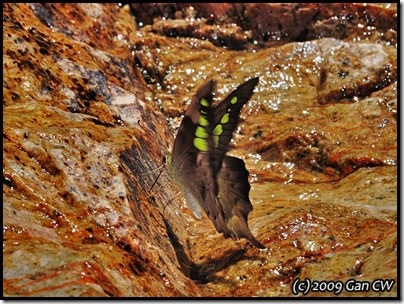 This is the biggest and rarest of all the Graphiums in Malaysia. It is about 1.4 times the average size of the other Graphiums and is very swift in flight. We saw this gem at a stream in Raub. It never stay at the same spot for more than 2 seconds and I was lucky to managed 2 shots with my 400mm before it took off.
This is my butterfly of the trip ! A 5-STAR ! 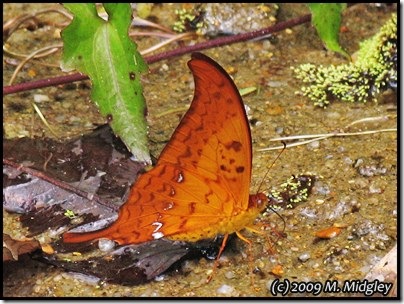 Our friend Maris and Mel came back one day asking what is this butterfly with sickle-shaped wings and long tail. All of us got excited and rushed to the spot where Maris photographed this butterfly but it was no where to be found :-( We went back again the next day and waited for 4 hours but it didn’t turn up. At least I know where to find it and this gives me another reason to go back to FH :-D

The last time I saw The Yellow Gorgon was 13 years ago at Templer Park, Selangor. 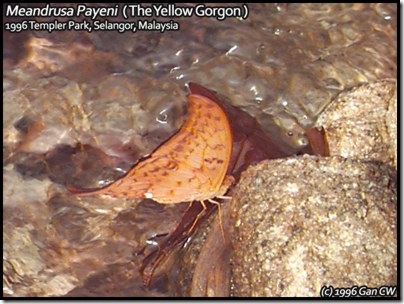 The picture above was taken 13 years ago with the then ‘top of the line’ Kodak DC40 digital camera which captures picture at 756x 504 pixels (less than 1 Megapixel). No bad for 13 year old technology with less than 1MP sensor !
Symbrenthia hypatia chersonesia
– The Intricate Jester 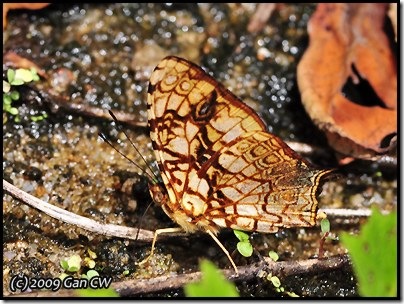 This is a lifer for me. Maris photographed this together with the Yellow Gorgon. I was very lucky because when we went back to look for the Yellow Gorgon, this individual landed right in front of me 5 mins before our scheduled departure ! According to BMP none of the Malaysian species of Symbrenthia can be described as common. Yahoo !!
Papilio palinurus palinurus – The Banded Peacock
A spectacular butterfly with luminous green dusted wings. 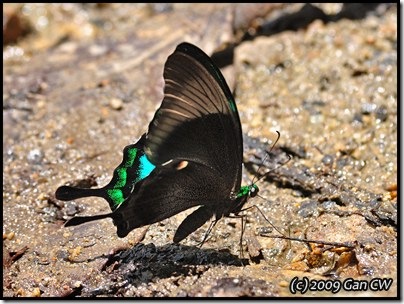 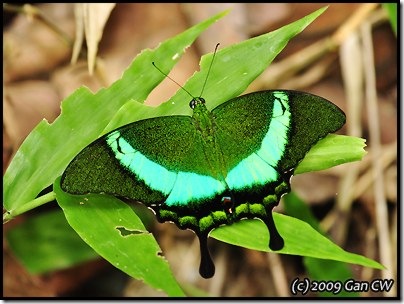 This is only the 3rd time I have seen this butterfly in the wild. The first time was at Ulu Yam in 1996 but my Kodak DC40 was too slow to photograph it. 12 years later with the signifcantly more advanced D90, I managed to capture a record shot before it took off. On this trip, we had 3 pristine individuals puddling on the ground. Using a 400mm lens, I managed to nail a few shots which captured the the essence of this beautiful butterfly. 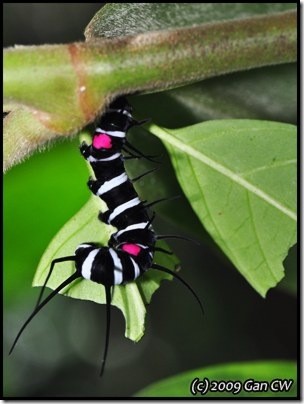 After seeing this Tree Nymp countless times at Fraser’s Hill, I finally found its larva and host plant. Yipee !!
Find out more about the Malay Tree Nymph here.


Neorina lowii neophyta - Malayan Owl
This butterfly can usually be seen at waterfalls near bamboo clumps. Their favorite pose is wings open flat resting on a leaf. 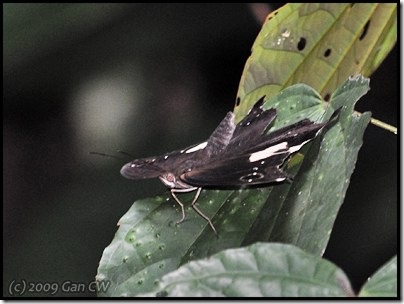 so I was surprised to find this individual puddling on the ground. This is a rare shot showing the underside of this butterfly. 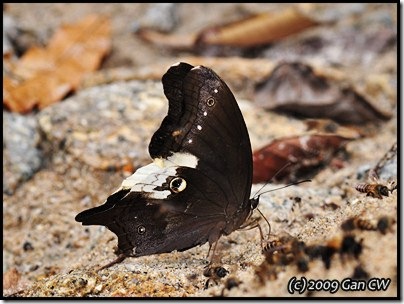 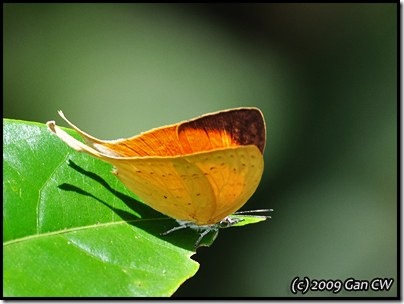 L. cassiopeia is a forest butterfly usually found at higher elevation.
It can be mistaken for the more common L. atymnus. However, it it is larger, with upperside redder and forewing black border continued along the costa. This is another lifer for me ! 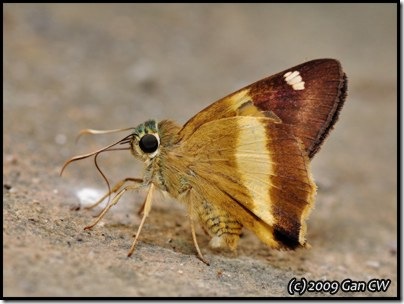 Hasora is not uncommon at Fraser’s Hill and I have recorded 6 species there. Hasora schoenherr is common but localised. One of the place to look for this skipper is at Jeriau waterfall. 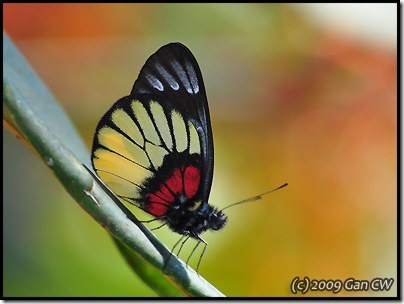 This is one of the most common Pieridae at Fraser’s Hill.


Papilio helenus helenus - Red Helen
This is the most common Papilio around the foot hill of Fraser’s Hill. 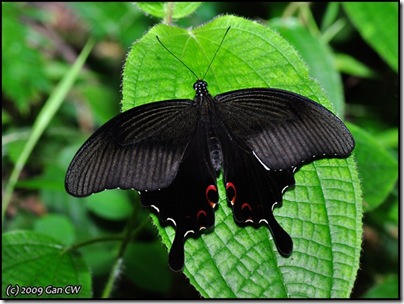 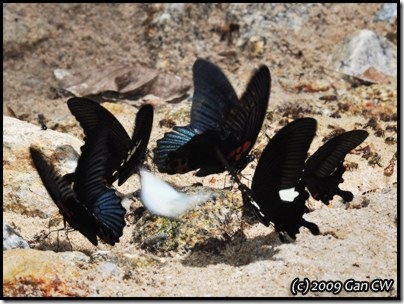 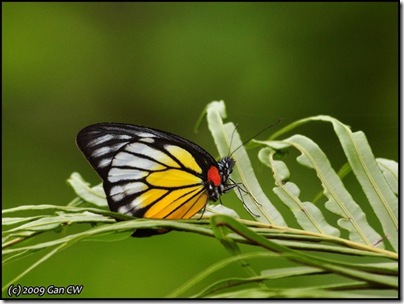 Appias pandione lagela - Banded Puffin
This is a montane butterfly which is not found below 1000 feet and is not uncommon at Fraser’s Hill. 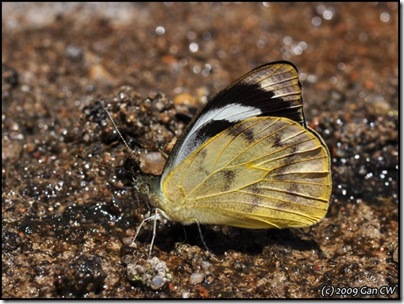 Part 2 will cover moths and other insects

My name is Jani.

your butterfly photos are very excited me.

Mamy of them , I have not seen before.

Do you mind if i would like to ask that where can i meet them in fraser hill?

My boyfriend and I are the butterfly's lover.
We plan to visit there 0n 3rd,March 2010.

We are not local people. kinely introduce me some place for butterfly watching.

This is my e-mail