Every time I see a Plain Nawab (Polyura hebe) caterpillar, I just have to take photo of it, even though I already have hundreds of similar shots. I am not sure if it is because I am fascinated by the Dragon-like armoured head, the way it parks itself on the 'landing pad' it meticulously weaved together or the light green crescent patterns along its abdomen. Probably all of the above ;-) So last week when I visited Mt Faber Park and saw a few early instar Plain Nawab caterpillars, instinctively I stop and took a few shots of them.

The early instar of the Plain Nawab caterpillar unlike that of the later instar, has black color head (instead of green) and green body without any patterns. 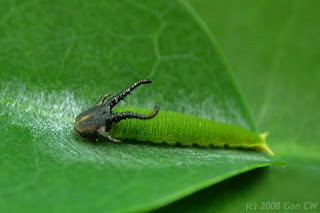 As I was about to move on, I noticed one of the caterpillars has a slight reddish horns. 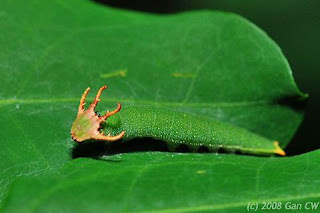 Interesting ! Again without thinking I took a few more shots and continued my journey up the steps along the Marang Trail.

Last night, when I was sorting through my photos, deciding which to delete and which to keep, I noticed there is something different about the 'red-head' Plain Nawab caterpillar from Mt Faber.

It is NOT a Plain Nawab caterpillar! It is the caterpillar of the Blue Nawab (Polyura schreiber).

So what is the big deal you ask? First, the Blue Nawab caterpillar is uncommon. More important is the fact that this one is found feeding on Saga (Adenanthera pavonina) instead of its normal food plant - Rambutan (Nephelium lappaceum). This validates BIG's 2001 finding that Adenanthera pavonina is an alternative host plant for Blue Nawab.