From a far, this species can be easily mistaken for a large Eurema, Gandaca or Catopsilia, especially when it is puddling with other Pierids.  However, its unique angled wing and blackish brown quadrate spot on the apex of the forewing makes it distintive and cannot be mistaken for any other species in Malaysia. 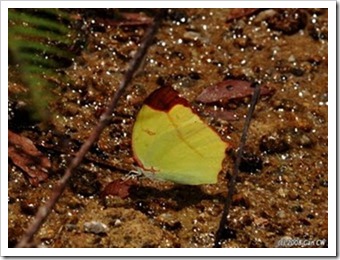 The larva host plant for D. gobrias is Dalbergia benthami, a plant that looks a bit like the Rattlebox pea plant (Crotalaria sp). Note: The species that is found in West Malaysia has been reclassified as Dercas gobrias herodorus.The reason for the change is because D. verhuelli is a continental species and can only be found in India, Myanmar, Thailand, Vietnam and southern China while D. gobrias is found in found Peninsula Malaysia, Sumatra, Borneo and Java.